UPDATE! Dalkeith Museum will be open Tuesdays & Thursdays from 5th July, between 11.00am until 3.00pm. Outside of this, private arrangements may be made to visit so please contact us via the enquiry form. Dalkeith History Society wishes you all a lovely summer break. The meetings will resume in September.
Find out more

The restoration of the Dalkeith Corn Exchange, once the largest in Scotland, was a key element of the regeneration project carried out in Dalkeith’s conservation area with grant aid from the Heritage Lottery Fund and Historic Environment Scotland.

The 3 year funded project enabled the Grade A listed Victorian building to be fully repaired and restored and to incorporate a bespoke Museum facility for the town.

The new Museum provides an open, welcoming public space where the rich history and heritage of Dalkeith can be explored. The Museum is managed and run by Dalkeith History Society via the Museum Advisory Group and their team of volunteers. 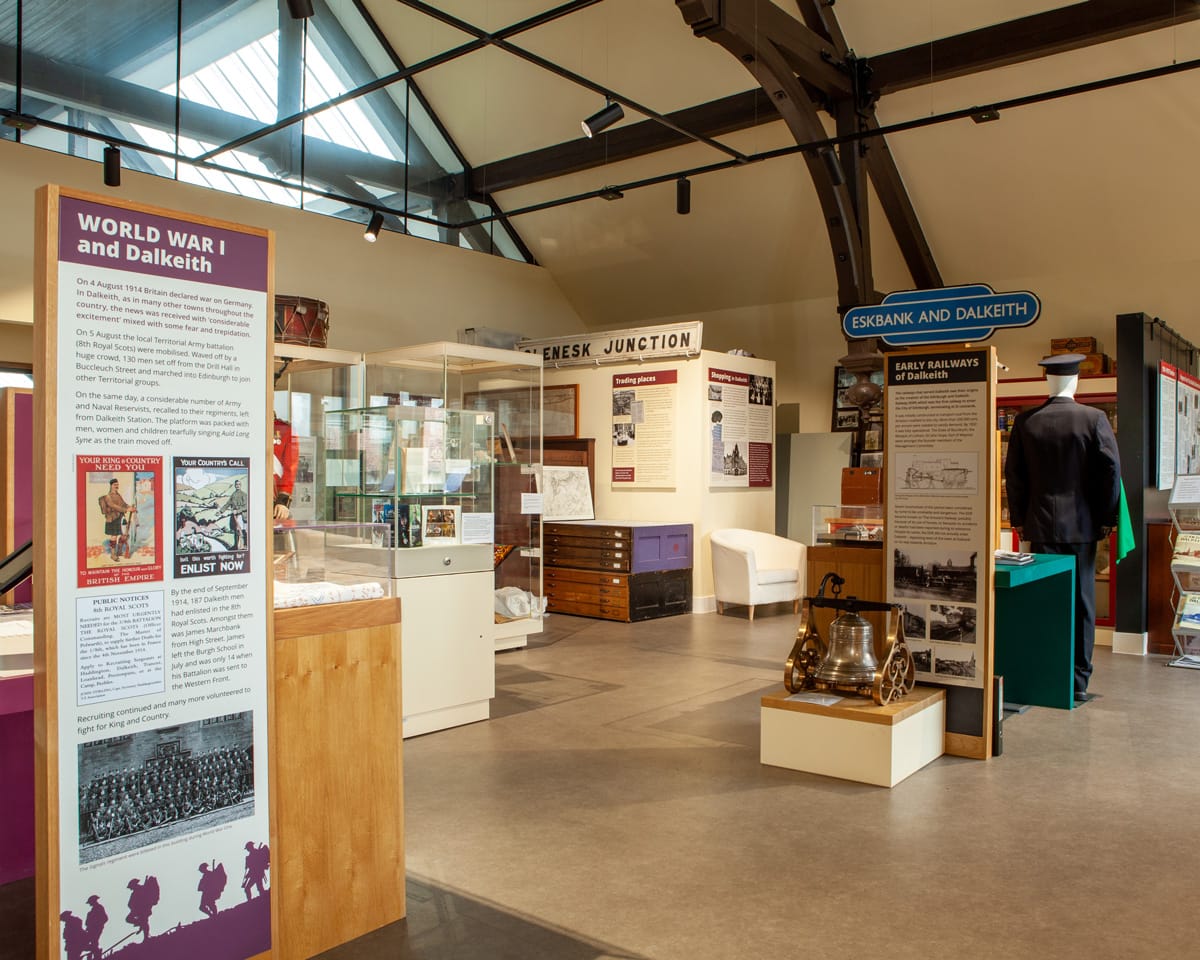 Dalkeith has a fascinating history – through the exhibition panels, display cases, cupboards, films and old photographs, aspects of the Dalkeith story will be revealed to visitors.
Here are just some of the subjects covered:

Dalkeith was the centre of the large mining and agricultural area of the Lothians.  The people employed in those industries needed all manner of equipment and domestic goods – and Dalkeith was able to supply.

Dalkeith, the bustling market town at the centre of Midlothian had an Iron Foundry, a Brass Foundry, a Brush Factory, a Carpet Factory, a Rope Factory, a Flour Mill, a Sawmill, an Abattoir and Livestock Market, numerous Saddlers and Blacksmiths and of course its own Brewery!

Crime, Banking and the Forger’s Story

The masterplan of forger John Henry Greatrex ended in Dalkeith!

Greatrex, a photographer from Glasgow, began forging in the basement of his Glasgow studio.  He decided that the easiest note to forge was the £1 Union Bank of Scotland.

In 1867, having successfully created a small fortune in notes, Greatrex and his accomplices went on a spending spree in Dalkeith and raised the suspicion of shopkeepers who called the police!

When searched, £1325 of forged Union notes were found.  Eventually, Greatrex, who had managed to get to New York, and his accomplices were caught and Greatrex served 20 years of penal servitude for his crime.

Dalkeith’s contribution to the efforts of wars was not just manpower, machines and money like all other towns and villages.

Maybe a member of your family signed this Signature Cloth, helping raise £35.00 in 1916?

Cromwell stabled his horses in the apse of St Nicholas Church during the Civil War and General Monck lived in Dalkeith Palace in the 1650s.

However, the advice given to General Eisenhower to delay the D Day Landings until 6th June 1944 by James Stagg, the Chief Meteorological Officer, undoubtedly changed the course of our history.  James Stagg was born and educated in Dalkeith.

UPDATE: Dalkeith Museum is open every Wednesday from 11.00am until 3.00pm. See our Exhibition: John Kay and Anthony Kirk – from Dalkeith to New York to Dalkeith Museum An exhibition of 18 prints by caricaturist John Kay, which have been generously donated by Anthony Kirk, a former pupil at Dalkeith St David’s and now a well known artist and print maker in New York. Not to be missed!

There are various ways in which you can help support the Dalkeith Museum.

Donate to the Collection

Become a Friend of the Museum

Looking for an interesting venue for a group or organisation? The Museum can accommodate up to approximately 30 persons for a private or group visit.